“Substitution” in Levinas and “Replacement in Sympathy”: Two Different Approaches to Facing the Other

The point of this paper is to compare substitution from the perspective of Levinas and the replacement sympathy as two approaches in facing the other. Sympathy, as one of the moral issues, is a way of paying attention and understanding the anxiety, worry, or need of others, which occurs consciously and with the recognition and replacement of the other. The substitution from the perspective of Levinas is also in relation to the “other” and outlines the scope of the subject’s responsibility towards him. In the beginning, Levinas’ subject imperially reduces the other to himself, but in the face of the “other,” he pays attention to the irreducibility and dependence of the consistency of his nature on it. In this way, the infinite responsibility towards the “other” becomes apparent; a responsibility that is formed before any kind of consciousness and self-consciousness and in a more passive space than any passivity, and its scope extends to the substitution of the “other” and expiation of the “other.” In the shadow of this infinite responsibility, substitution is distinguished from sympathetic and empathetic replacement. Sympathy, which has been described as a virtue in many moral systems, is a form of altruism through which an actor, by entering into the worries and sufferings of others, replaces himself in a scene of their pain. This replacement is based on knowing the other and imagining his position and ultimately transforming the other into another me. Accordingly, some have introduced sympathy and benevolence as the basis of morality (see Hume, 2009, 499-500) and by emphasizing the essential role of compassion in human moral life, an argument is made on compassion as a pillar of morality. (Schopenhauer, 1903, 171). Levinas also speaks of substitution in several places in his work, which is defined as a replacement in sympathy in relation to another. In other words, replacement in sympathy is the product of the relation between the actor and the other, and substitution in Levinas is based on subjectivity, which is itself based on the relation between the subject and the “other.” This paper wants to provide a comparative analysis of the subject’s substitution in Levinas with the concept of replacement on sympathy.
Of course, although the concept of “other” in Levinas’s thought is different from the other in sympathy, the relationship between ‘replacement’ (taking the place of) and ‘substitution’ in the two can be examined; for although in Levinas’s view the position of the “other” is defined beyond the essence of the subject and in sympathy after the stage of essence, substitution in Levinas can be proposed in terms of rank later than the stage of essence.
‘Substituting the other’ in Levinas, unlike “replacing the other” in sympathy, while excluding cognition, changes from another level of understanding the other to the position of expiation of the other, and such a change is justified by the explanation of subjectivity.
No independent research has been done on the relationship between the replacement in sympathy and substitution with the “other” in Levinas, and no analysis has been provided in this regard. This paper, in order to analyze the relation of replacement as one of the principles of sympathy and substitution proposed in Levinas, first defines sympathy and examines the other’s place in it, and then in order to achieve the concept of substitution in Levinas’s thought, examines concepts such as subject, saying, said and responsibility from his point of view. 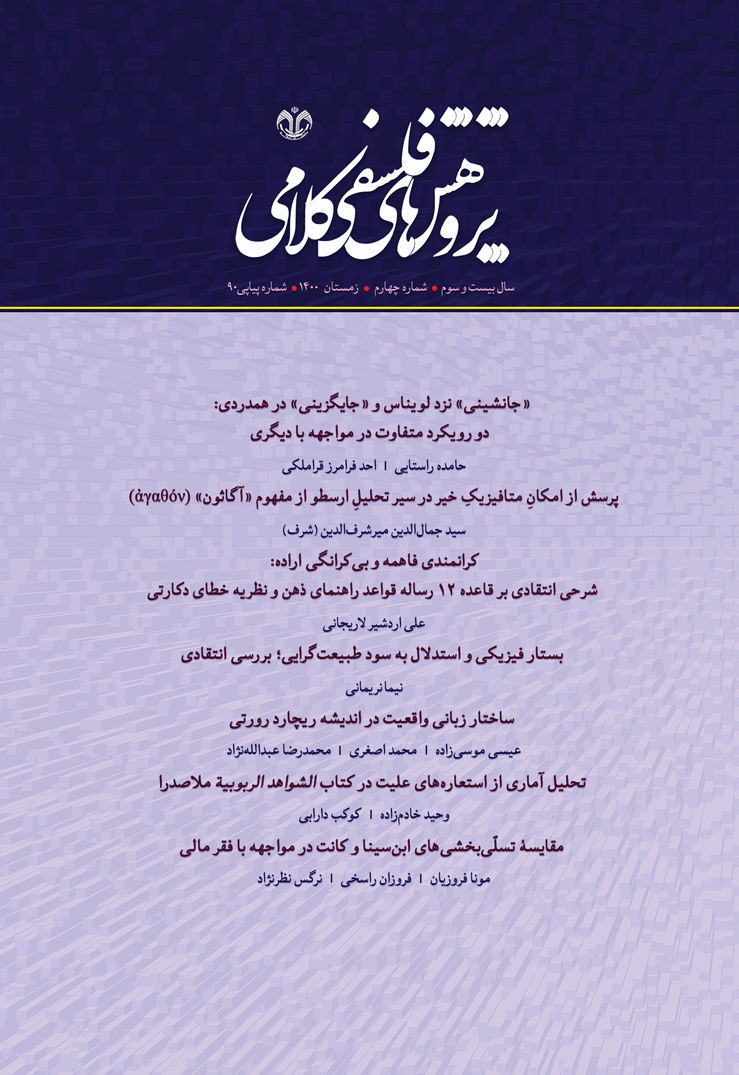