A Study of Richard Dawkins’s Cumulative Argument with Emphasis on Keith Wards’ Views
‘Abdul Rasool Kashfi
Ali Reza Farrokhi Balajaddeh
Some scholars of natural sciences, including Richard Dawkins, believe that material world is “self-explanatory” in the process of nature formation and creation of living creatures and that natural selection which is a cumulative process can alone explain the formation of this world form its initial simple composition to current complex one, with no need to assume a clever origin in the process of evolution. On the contrary, some theosophists, including Keith Ward, believe that cumulative selection alone as a blind and aimless process is unable to provide a comprehensive and precise explanation about evolution process, its outcomes and vital stages and that the best explanation for evolution is to take for granted a clever origin as the designer of evolution process. Given the explanatory inadequacy of mere natural selection in explaining the process of evolution, the present paper seeks to prove that, first, Dawkins’s materialistic approach in cumulative process argument is based on a set of philosophical mistakes; and second, if a precise explanation of the theory of cumulative natural selection is provided, this theory will not negate the existence of God; rather it will be another proof for theism.
Key words: Richard Dawkins, Keith Ward, evolution, natural selection, cumulative process.

The Relationship between Virtue and Happiness in Aristotle and Ghazali’s Views
Majid Mulla Yusefi
Umme Leyla Shirkhani
In addition to the asking about the nature of virtue and how to achieve it, ancient philosophers mainly asked whether virtues are useful for men, that is, do they lead to man’s happiness? In fact, their question was about the relationship between happiness and virtue, in that they asked whether virtues are necessary and inevitable for happiness or not? Aristotle believes that virtues are necessary condition to achieve happiness, though, contrary to Plato, he does not regard them as required condition. He defines happiness as the soul’s activity conforming to virtue. In fact, Aristotelian virtues which are rooted in mere intellect are the means of achieving a happy life in this world. Ghazali distances from Aristotle when discussing the nature of virtue, happiness and their relationship, though he was influenced by Aristotle. In this regard, Ghazali’s explanation, contrary to Aristotle’s, is not based on mere intellect; rather, it is based on revelation and Sacred Law. Therefore, Ghazali believes that moral virtues are not restricted to philosophical virtues and does not regard happiness as merely enjoying a happy life in this world. On this basis, the present paper reviews similarities and differences between Aristotle’s and Ghazali’s explanation about the nature of virtue and happiness and their relationship.
Key words: Aristotle, Ghazali, virtue, happiness-orientation, Eudemonia.

The Nature of Revelation in ‘Allamah Majlesi’s View: Principles and Foundations
Seyyed Ali Moosavi
Reza Berenjkar
Given ‘Allamah Majlesi’s religious approach to address the nature of revelation, the principles and foundations of his method in this regard are also conforming to this approach and resulting from Quranic verses and traditions, which he asserted or extracted from his own descriptions of the nature of revelation. Some of these principles are epistemological and some others are ontological. These principles are: materiality of angel, the origin of prophecy of prophets, centrality of transmitted sciences by adopting intellectual-transmitted method, authenticity of outward meanings, contenting with undifferentiated mood of divine sciences, real science in the Book and traditions, infallibility of prophets, the proof of Prophet Righteousness, and the effects of Holy Spirit on prophets. The present paper seeks to study these principles.
Key words: Majlesi, revelation, Holy Spirit, revealed sciences.

Ontology of Vacuum
Ahmad Hakim[1]
One of the earliest results of quantum fields theory is that vacuum contains (infinite) energy. This result is compatible with empirical tests and to some degree with other fundamental theories of physics such as general relativity theory. Having reviewed the ontological dimensions of the concept of vacuum in philosophy and physics, the present paper first concludes that what is called “vacuum” in physics does not mean absolute nothingness and that absolute nothingness cannot essentially bring about a measurable effect neither in classical nor in modern physics. Furthermore, it proves that this conclusion does not mean that philosophical subjects about the concept of vacuum in physical theories are completely rejected and that no clear and distinct explanation can be provided without discussing these subjects.
Key words: ontology, vacuum, energy, quantum fields, general relativity theory.

The Origin and Background of Illuminationist Philosophy
Mohammad Beheshti
The present paper studies the origin and background of Sheikh Shahab al-din Sohrevardi’s Illuminationist attitude and depicts its ancient root and precedence. His attitude is a kind of philosophy whose thrust is mystic experience and intuition, and logical and intellectual thinking. Self-knowledge and knowledge of soul which can only be attained through ascetic discipline and purification of inner state is the key for correct understanding of this philosophy. The present paper proves that there are several and different origins and backgrounds for philosophical school of illuminationism including the Holy Quran, Holy Prophet’s way of life, philosophy of ancient Iran, Hellenic philosophy, Aristotelian philosophy, mysticism, Sufism, etc. Illuminationist philosophy uses all these foundations and resources, and combines and gathers them in itself by its particular system-making and engineering. Among other main resources of this philosophy are Sohrevardi’s inner inspirations, witnesses and unveilings as he himself asserted.
Key words: origin, Illuminationist philosophy, ancient philosophy, illumination, intuition, Sohrevardi.


Imams’ (peace be upon them) Knowledge of Unseen World in the Mirror of Intellect
Gholam Hussein A’rabi
Seyyed Habib Bokharaiizadeh
The present paper seeks to examine two basic questions related to the knowledge of unseen world from an intellectual view in two separate parts. In the first part, two intellectual proofs have been proposed to prove that man’s soul is so capable that it can transcend all limitations in its evolutionary journey and gain knowledge about whatever behind them though its body imposes some limitations on it. In the second part, three proofs have been proposed to prove that Infallible Imams (peace be upon them) enjoy the highest degrees of knowledge of unseen world in terms of quality and quantity.
Key words: knowledge of unseen world, Imam, intellect, Imamate, Imam’s knowledge, infallible Imams (peace be upon them). 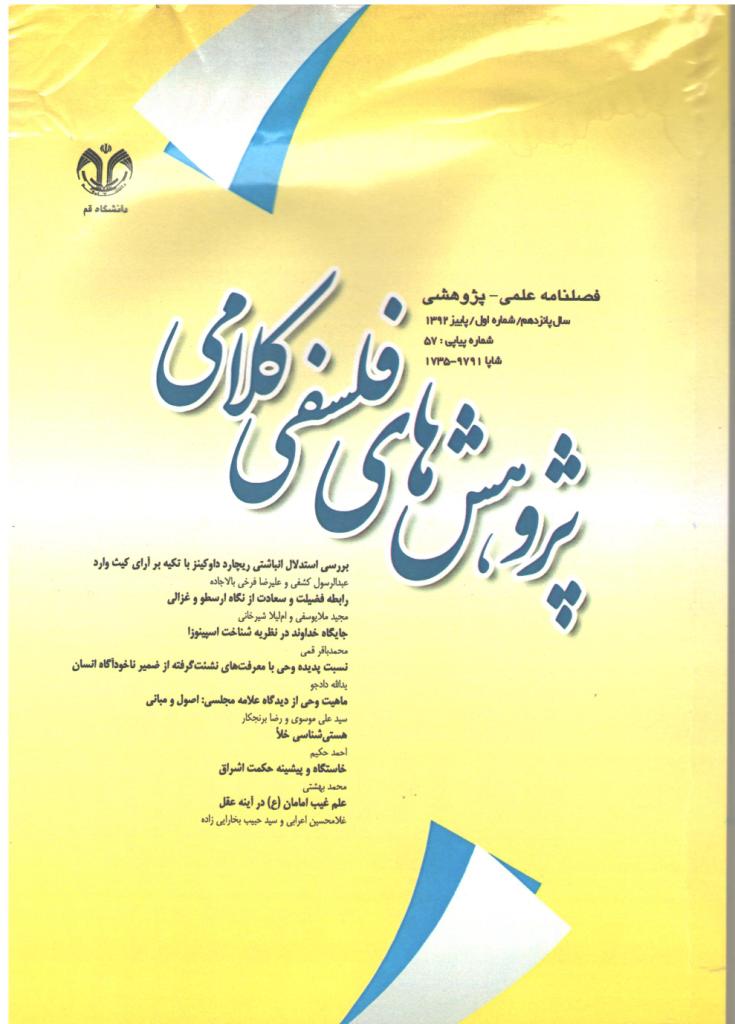