Incompatibility between Falsificationism and Realism
Morteza Fathizadeh
Popper's falsificationism is a theory on scientific methodology and a criterion to separate scientific propositions from unscientific ones. Contrary to inductive method, it does not seek to prove the conclusive truth or even inconclusive and probable truth of scientific theories based on psychological self-evidence of observable and so-called basic propositions. Therefore, theories always remain at the level of conjecture and guessing. However, they can be approximately true guessing, although they are not absolutely or probably true conjectures. The concept of "approximate truth" or "more approximation to truth" is closely related to the reinforcement of propositions, degree of reality-showing or truth-showing, and scientific progress. Such an idea at least necessitates accepting the doctrine of correspondence between truth and realism about the existence of universe and scientific identities independent from men's minds. However, critics claim that Popperian falsificationism and scientific realism are incompatible and one is actually given up at the expense the other. Some scholars believe that realism is at most more compatible with positivism and others hold that falsificationism necessitates the rejection of essentialism and as a result necessitates unrealistic instrumentalism. The present paper tries to elaborate on these claims.
Key words: realism, falsificationism, reality-showing, approximation to truth, popper.

An Analytical Look at World of Pre-existence in the School of Tafkik (Separation)
Ja'far Isfahani, Reza Akbari
The school of separation (Tafkik) accepts the existence of pre-existence world based on such foundations as inclusiveness of real sciences in revealed sciences, the authenticity of appearances, non-detachment of spirit, priority of creation of spirit over creation of body, separation between intellect and essence of spirit, and existence of worlds before this world. The pre-existence world is of great importance in this school due to its relation with natural cognition of monotheism, the reason of prophets' mission, and the criterion of personality's identity. The theorists of this school provide transmitted reasons for the existence of pre-existence world, among which the tradition used in the commentary of verse 172, Chapter 7 (Sura A'raf- the elevated places) is of special significance. This school provides solutions to those problems raised on the existence of pre-existence world. These problems are divided into two groups, one claiming that the existence of this world is impossible and the other one holding that the reasons provided for the realization of this world are not sufficient. There are five main problems is group one and two in group two. The answers provided for these two groups by theorists of this school are based on their principles, which are centered on transmitted reasons and criticism of foundations of each problem.
Key words: the world of pre-existence, Adam's descendents, convention, natural knowledge, the school of separation (Tafkik)

The Stages of Divine Essence in Chapter 112 (Sura Ekhlas-Unity) of Holy Quran
Seyyed Reza Eshaqniya, Hussein Zahmatkesh
The holy Chapter Ekhlas (Unity) is one of the important chapters in the Glorious Quran whose position is clear in infallible imams' sayings and Muslim thinkers' commentary views. This chapter includes deep mystical points on Divine Essence on which many views have been proposed. Accordingly, this chapter indicates the tenor of three stages of God's essence- absent of all absents, oneness, and uniqueness- based on mystics' esoteric and mystical views. The present paper briefly studies Muslim mystics' mystical approach to stages of Divine Essence using the Chapter of Unity. The stage of absent of all absents is a non-conditional- as- the- source- of- division essence which has no sign and there is no means to acquire knowledge on it. The stages of oneness and uniqueness are conditioned- by- no- condition and conditioned-by-something essences, respectively. No doubt, the essence of the Most high God is one and these three determinations are named based on a consideration. The nature of mystical approach to stages of Divine Essence with regard to this monotheistic Chapter (Ekhlas- Unity) usually indicates this commentary explanation that "He" refers to the stage of absent adytum of essence i.e. absent of all absents; "God is one" means the stage of essence of Divine Unity; and "God is He on Whom all depends" means the stage of essence of Divine oneness.
Key words: mystical commentary, Chapter of Ekhlas (Unity), Divine Essence, stages of essence, manifestation.

Differences between Reformative Developments in Contemporary Islamic World and Reformation Movement of Western Christianity in 16th Century
Seyyed Abulhassan Navvab, Behrooz Haddadi
The Sixteenth century's religious reformation movement (Reformation Movement) in West has grand and fundamental differences with reformative movements in Islamic world, despite their similarities and identities. No doubt, these differences are sometimes considered merits of a social trend and sometimes its demerits based on a comparative analysis. Their most important differences are as follows: Reformation Movement had strong philosophical and theological supports but these supports do not exist in Islamic world or they are weak; Islamic world enjoys a kind of theological attitude which is immune against some demerits of Christian theology; West valued empirical thinking while Islamic world ignores it; there is a basic difference between West and Islamic world in terms of worldview and anthropology; contrary to Islamic world, religious reforms were widespread and massive in West; Islamic world pays attention to social dimensions and its related components such as law, constitutionalism, freedom, separation of powers, justice and this world as the introduction to hereafter versus pure Protestant hereafter-orientation; there were civil and social power centers as influential factors to control authoritarian  governments in West. The present paper investigates these differences.
Key words: religious reforms, Europe, Islamic World, Christianity.

Conceptology of Ousia in Aristotle's Thought
Eshaq Taheri Sartashnizi
Based on insightful study on the theory of "first principle" and Plato's theory of "Forms", Aristotle has proposed the theory of Ousia and used it as basis of his ontology. However, this theory has been subject to some precise criticisms. Discussing the formation process of this theory, the present paper elaborates on some of its conceptological problems based on Aristotle sayings. "Non-prediction on subject" and "non-existence in subject", as two main features of Ousia, is a kind of attribution to generals and accepting contraries while holding numerical unity of Ousia is not acceptable, because it is subordinate to differentiation between psychic and relative features of object and Aristotle has not elaborated on this differentiation.
Key words: Aristotle, Ousia, first principle, arche, prediction on subject, existent in subject.

The Role of Love in Creation from Islamic Mysticism's Viewpoint
'Abdulmajid Muhaqqeqi, Qobad Muhammadi Sheikhi
In Islamic mysticism, the most basic factor of creation is The Most High God's essential love towards His Most High essence because all loves originate from love of that eternal beloved who is lover and beloved. The position of this love in everything other than God is spirit which is combined with love of Truth. This love is partially manifested in all creatures based on their existential capacities. Since man has the most capacity to enjoy this love, he is named "the most noble of all creatures" in this mysticism. Due to their connection with the Most High God, spirit and love are eternal and everlasting. The first manifestation of Divine love is manifested in the spirit of Seal of Prophets – Holy Prophet Muhammad Mustafa (- Chosen Muhammad-May the blessing and peace of Allah be upon him and his progeny) - which is called Muhammadan Reality. Therefore, if any creature enjoys part of that love, it is due to this characteristic of Seal of Prophets. Having briefly explained the kinds of love, its degrees and requirements, the present paper discussed how this love flows and communicates between creator and creature, and its role in creation system from the viewpoint of Islamic mysticism and Muslim mystics. It concluded that Divine names and attributes are only manifested through Muhammadan Reality and its complete and perfect expressions are manifested in everything other than God, i.e. invisible and visible worlds.
Key words: love, knowledge, arc of descent, arc of ascent, sacred law, Muhammadan Reality. 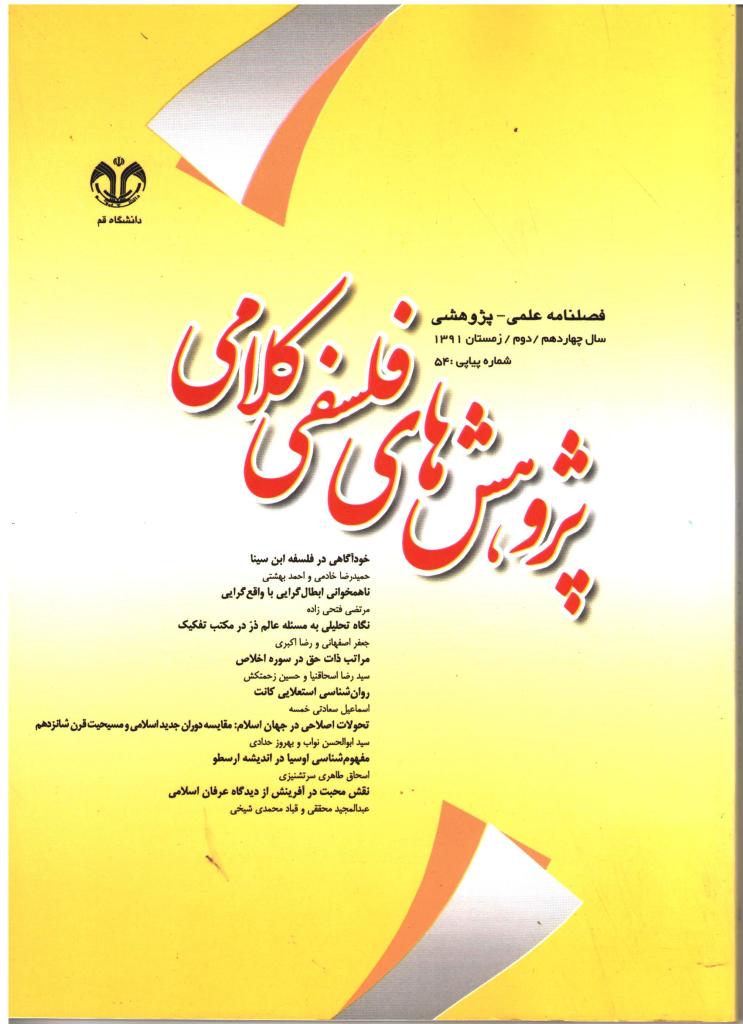