The Nature of Knowledge from Spinoza’s Point of View
Mohammad 'Ali 'Abdullahi
Mahdi Motahhari
Idea, the principal term in Spinoza’s epistemology, is an indirect mode for the attribute of thought. Idea is a primary, active, and judgmental constituent of the human soul. Different kinds of idea entail: imagination, reasoning, and intuition. Having the same meaning, truth and adequacy are the criteria of its validity. Correspondence is an extrinsic mark of the truth of idea and explanation, whereas, evidence, clearness, and distinctness are the intrinsic marks of the adequacy of the idea. According to Spinoza, knowledge is divided to two kinds, complete knowledge and incomplete knowledge, the common feature of which is "justified belief". So knowledge is a belief (an idea with judgment) which has a justification (causal explanation or sensory evidence). Therefore, imagination, reasoning, and intuition are from the category of knowledge, however, only the second and the third are regarded as complete knowledge.
Keywords: idea, truth, adequacy, belief, justification, knowledge, Spinoza


Illuminative Wisdom in the Philosophical Thought of Avicenna
Mohammad Mahdi Gorjiyan
Sayyid Mahmud Musawi
Ma'sumeh Isma'ili
Avicenna as one of the great commentators and teachers of Aristotelian philosophy is a rationalist philosopher setting the most emphasis on reasoning. In some of his works, however, he showed an inclination toward illuminative philosophy. Some of these works are as follows: Hayy Ibn Yaqdhan, Risalat al-Tayr, Risalat Salaman wa Absal, Qasidah 'Iyniyyeh, and Risalat fi al-'Ishq and most importantly the last three parts of Al-Isharat: speaking of happiness and felicity, the positions of mystics, and the secrets of the charismatic acts of the saints. Avicenna himself alluded to his interest in illuminative philosophy in the introduction of one of his works called, Mantiq Al-Mashriqiyyin, in which he writes of the a different tendency, separating him from peripatetic philosophers.
Keywords: Rationalism, illuminative method, argumentative method, illuminative philosophy, illuminative knowledge, Avicenna.

Examination of the Method of Mathew Lipman and the Role of Philosophy in "Philosophy for Children"
'Ali Sattari
Philosophy has gained a new meaning from the Lipman point of view, which has a particular role in applied philosophy in educational programs for children. The word philosophy in "philosophy for children" is used as the way of thinking, intended to familiarize children with the skills of understanding such as reasoning, true judgment, and acquiring the skills of social cooperation by analyzing the concepts of ordinary language to ultimately solve the problems of life. Lipman, following the Socrates pattern of critical thinking, with relying on the pragmatism, analytical philosophy, social and epistemic psychology, has found a new method of philosophizing for children, which is regarded as an innovative method from the philosophy of education perspective. In this article, referring to the influences of philosophers on Lipman, we explain his views concerning these skills.
Keywords: philosophy, philosophy for children, philosophy with children, community of inquiry, Mathew Lipman


Rationalism and its functions in the Evolution of Religious Thought from the Quranic Perspective
Mohammad Taqi Diyari Bidgoli
Sayyid Jamaluddin Mirmohammadi
Rationalism in the Qur'an is regarded as an efficient and advanced method used by those who are interested in finding religious realities from the outset of Islam until now in order to discover various needful phenomena in different times and its various functions caused religious thought to be promoted. Investigating the nature of rationalism and its function in the Qur'an and its role in the evolution of religious thought, this article has explained its most important functions (evolution in social thought, revival of religious knowledge and its improvement, profound intellectual developments, evolution in the political system of Islam). Then by marking the viewpoints of religious thinkers, it proves these functions based on rational, Quranic, and historical basis.
Keyword: reason, rationalism, rational interpretation, the method of rational interpretation, functions of rational interpretation, religious knowledge.

Examination and Criticism of Shu'ubiyyah Movement and its Impact on Shi'a Theology
Sayyid Mohammad Reza Hosayni
By the emergence of Islam, the rate of the knowledge of the people living in Arabia was promoted, but after the death of the Prophet the Muslim nation experienced separation and disagreement by the appearance of some political parties with their particular ideology. In response to the Umayyads as the Arab party emphasizing on mastery of Arab race and enforcing anti-religious policies, an equalitarian thought rejecting racism emerged under the title of "Ashab Taswiyeh"(equalitarians). This group was involved in extremism and a party named "Excessive Shu'ubiyyah" emerged. Each of them had its own goals, motivations, and plans but they had some common mottos such as: justice, rejection of racism, and equality. Shu'ubiyyah which emerged in reaction to the extremism of Umayyads got themselves involved in racialism ideas. Believing in privileged status of the Iranian race, they tried to effect theologians by their specific interpretation of the Qur'an. Shi'a’s theological school originated from the Qur'an and the Sunnah of the Prophet was immune from their deviations. In this article we try to explain the formation and the rate of their impact on Shi'a theology.
Keywords: Arab fanaticism, equalitarians, Shu'ubiyyah, Mu'tazilites, exaggerators, Shi'a theology 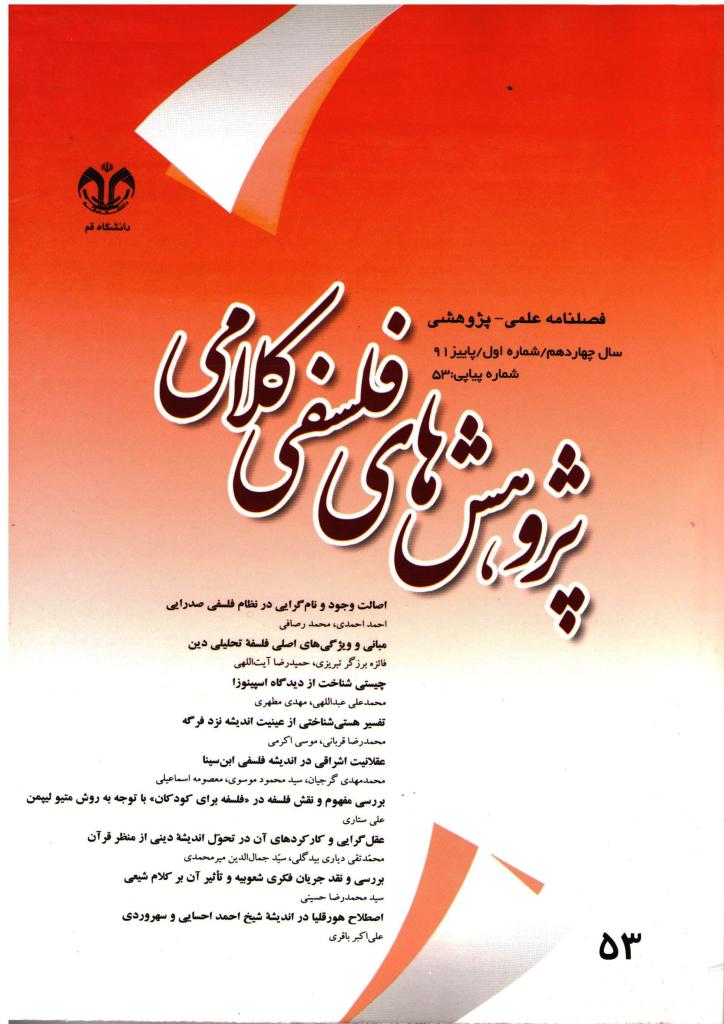